Many, many thanks to Carson City Lodge #2177 of the Benevolent and Protective Order of Elks for hosting a highly enjoyable and successful fundraising and recognition dinner last Friday for Carson City Sheriff’s Search and Rescue!! 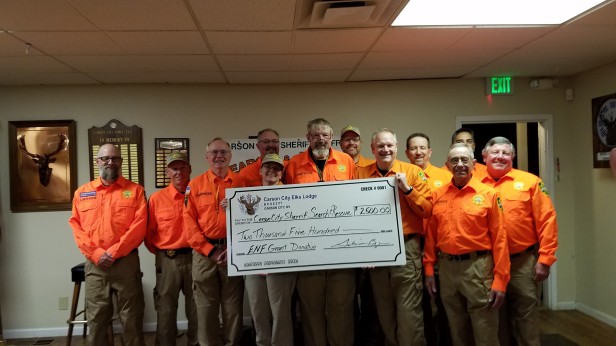 As the evening kicked off, Search and Rescue members met guests in front of the building and provided vehicle displays while other SAR members circulated with appetizer trays and raffle tickets. The event itself opened with a presentation of a $2,500 Elks State Foundation Grant by Al Bye. This grant funding will be used by the SAR Unit for the purchase of communication and navigation equipment.

After dinner Master of Ceremonies Bill “Fergi” Fergus presided over a raffle drawing and live auction. Included in the raffle was a .308 Mossberg rifle, while the live auction provided a 4-night stay at the Mammoth Ski and Racquet Club, a Lake Tahoe day cruise with lunch provided, and a outdoor BBQ with canopy, BBQ tools, cooler and craft beer.

The true “highlight” of the evening though was the generosity of the Elks membership and that of the community in attendance and at large. Through their giving hearts, 100% of the funds received from the dinner ticket sales, raffle ticket sales, and auction will go to Carson City Sheriff’s Search and Rescue. These funds will assist with replacement of “dated” Swift Water Technician gear, provide training for Rope Rescue Technicians, and assist with the operations of the 25 member volunteer SAR Unit.

There is no possible way that Carson City SAR could name each and every person who gave to this event or those who made monetary or in-kind donations for, during, and after the event. The membership of Carson City Sheriff’s Search and Rescue has been truly overwhelmed by everyone who contributed to the success of this event. We cannot say “Thank you” enough.

Additional coverage of this event on Carson Now.